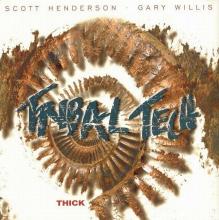 On "Thick", Scott Henderson (Chic Corea, Jean Luc-Ponty, Joe Zawinul) and the members of Tribal Tech threw convention  out the window, entering the studio for the first time without a set  list of heavy arrangements. By turning on the tape machines and bravely setting out to play together as a unit, Tribal Tech delivered one of the most revered recordings of their impressive history as a band.

Tribal Tech is a progressive fusion band, originally formed in 1984 by guitarist Scott Henderson and bass player Gary Willis. From 1993 forward the band included Scott Kinsey on keyboard and Kirk Covington on drums, and has produced nine albums that stretch the borders between blues, jazz, and rock. The band dissolved following the release of 2000's Rocket Science, with the various members pursuing solo careers.