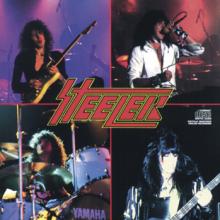 Note: This product is not available as a digital download.

Steeler was an early 1980s American heavy metal band from Nashville. Band members included: Ron Keel on vocals and guitar, Michael Dunigan on lead guitar, Bobby Eva on drums and Tim Morrison on bass. In 1982, they released the single "Cold Day in Hell". Eva left the band after a short while and was replaced by drummer Mark Edwards. This new line-up did not last long and released no albums or singles.