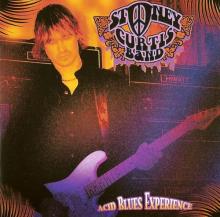 The Stoney Curtis Band has been worked the clubs between Los Angeles and Las Vegas for five years honing their own brand of psychedelic blues rock, readying their show for the road ahead, before hitting other major markets in the USA. Heavily steeped in 60's/70's psychedelia, the Stoney Curtis band has translated the energy of their phenomenal live show into the grooves of "Acid Blues Experience” and Stoney has become a familiar face on the European blues circuit.