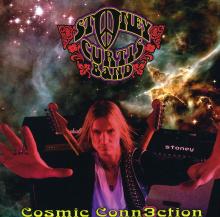 This is one of those rare times when you can almost judge a record by its' cover. From the title "Cosmic Connection," and the band's psychedelic logo to the moody front cover depicting Stoney Curtis in the cosmos, acid blues fans will know to expect something great. Heavily steeped in 60's/70's psychedelia, the Stoney Curtis Band has translated the energy of their phenomenal live show into the grooves of their third Blues Bureau CD "Cosmic Connection."