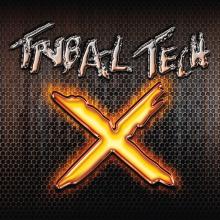 Tribal Tech X documents the latest musical journey of this revered Jazz Fusion super group, known for their complex arrangements and phenomenal solo interplay. On X, the members of Tribal Tech, Scott Henderson, Gary Willis, Scott Kinsey, and Kirk Covington once again throw convention out the window and entered the studio without a set list of heavy arrangements. Instead, each member brought musical sketches to the table and they turned on the tape machines and bravely set out to play together as a unit. Tribal Tech has delivered perhaps the most phenomenal recording of their impressive 25+ year history as a band.

Tribal Tech is a progressive fusion band, originally formed in 1984 by guitarist Scott Henderson and bass player Gary Willis. From 1993 forward the band included Scott Kinsey on keyboard and Kirk Covington on drums, and has produced nine albums that stretch the borders between blues, jazz, and rock. The band dissolved following the release of 2000's Rocket Science, with the various members pursuing solo careers.