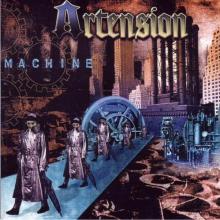 Artension was the brainchild of Shrapnel Records head Mike Varney. He received a demo from wunderkind keyboardist Vitalij Kuprij and progressive axeman Roger Staffelbach of a project they called "Atlantis Rising".  Varney began to look for other musicians to round out the lineup. After a lot of consideration, Varney presented Vitalij and Roger with vocalist John West, Bassist Kevin Chown, and drummer Mike Terrana. The result was a band called Artension (named by the band for a combination of the words "art" and "tension") and a CD called "Into the Eye of the Storm".