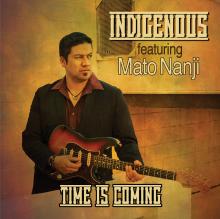 Indigenous featuring Mato Nanji "Time Is Coming" is a mix of the best elements of past Indigenous CD’s with more rootsy influences from artists like Jr. Kimbrough and R.L. Burnside. Hot on the heels of 2013’s critically-acclaimed CD “Vanishing Americans” and 2012’s much lauded “3 Skulls And The Truth” where he traded licks with Los Lobos front man “David Hidalgo” and North Mississippi frontman Luther Dickinson, “Time Is Coming” is the next logical step in the evolution of Indigenous’ time tested blues/rock brand.