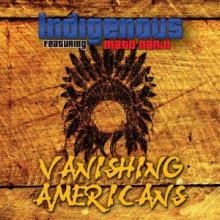 Vanishing Americans combines the best elements of past Indigenous CD s, with some rootsy influences from artists like Jr. Kimbrough and R.L. Burnside yet retaining the retro blues rock edge of artists such as Jimi Hendrix, Stevie Ray Vaughan, and Cream. Indigenous songs are powered by lead singer/lead guitarist Mato Nanji who is, without a doubt, one of the most impressive blues rock players/singers on the circuit today.