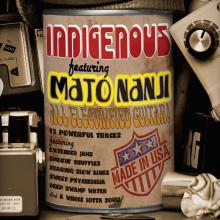 Indigenious stretches Mato's already established musicianship into a hard-hitting, guitar-driven package of musical excursions and playful songwriting. Joining Mato on the opening song is the soulful Jonny Lang. 'Free Yourself, Free Your Mind' is a hook laden track providing the groundwork for two true guitar masters to jam it out without borders or fences. The duo has been working together on the Experience Hendrix Tour for a number of years along with other guitar heroes including Kenny Wayne Shepard, Robert Randolph and Los Lobos legend, David Hidalgo. Mato mentions what an honor and learning experience the tour has been for him.