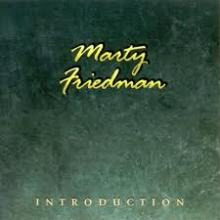 "Introduction" is a richly textured musical tapestry that combines the atmospheric, ethereal qualities of keyboard-oriented New Age and space rock with a tightly woven assortment of guitars. "Introduction" not only offers something to Friedman fans and guitar fans, but achieves a quality which transcends genre classification, leaving listeners in awe of Friedman’s musical prowess. It is a far cry from Friedman’s work with Megadeth but his fans love it just the same.

Marty Friedman began his career as a Shrapnel solo recording artist and later recruited a then 17 year old Jason Becker to form the yet unrivaled dual guitar unit, “Cacophony”, who have a strong influence on today’s top guitarists. Amassing worldwide acclaim as a guitar superstar, he came to the attention of Megadeth. Racking up sales of over 10 million records with Megadeth, Friedman continued to record solo records, often embarking on adventurous musical forays far removed from his work with Megadeth, including an album with Golden Globe winner Kitaro.