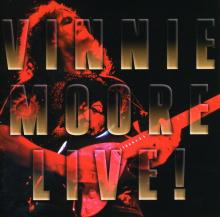 Moore was born in New Castle, Delaware. He began his professional career at age of 12 and played clubs and bars until Shrapnel executive Mike Varney discovered him through a magazine article. His connection to Varney led to an opportunity to appear in a Pepsi commercial in 1985, (only Vinnie's hands appeared in the commercial as his guitar playing is heard. Following this, Moore recorded his first solo album, Mind's Eye, released on Shrapnel Records and featured Tony MacAlpine on keyboards. The album received several awards from guitar magazines and sold over 100,000 copies.