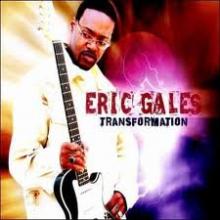 “Transformation” is the next logical step in this prolific artist’s career as it is deeply centered in the blues but played with the edge and aggression of a young guitar hero.