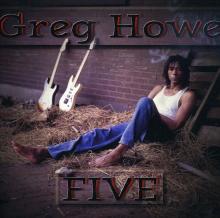 Greg Howe's newest album, "Five" is an instrumental CD comprised of aggressive rock fusion compositions which showcase Howe's renowned technique and strong sense of melody. Howe serves up a heavy yet unpredictable combination of blues and fusion masterpieces that highlight this world-class album.

Greg Howe officially began his solo career after sending a demo tape to Shrapnel Records in 1987, upon which he was immediately signed by founder Mike Varney. His self-titled debut album was released in 1988, during the popular shred era, and went on to become his highest-selling album. A Guitar World article in 2009 would rank it as tenth in the all-time top ten list of shred albums. The following year, he joined with Albert to form a Van Halen-inspired hard rock group named Howe II. Through Shrapnel, they released two studio albums: High Gear (1989) and Now Hear This (1991).