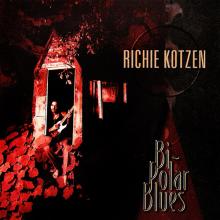 Richie Kotzen's latest release "Bi-Polar Blues" is a retro blues vocal album which showcases Richie's versatility as a gifted songwriter and guitarist. A veritable blues guitar fest, this album is comprised of popular blues standards mixed with strong original compositions that showcase Kotzen tearing it up on his guitar. After a solo deal with Interscope, one with Geffen and over 20 CD’s released over a 20 year span, Kotzen has developed a healthy following and continues to release a new record a year and tours throughout every year.