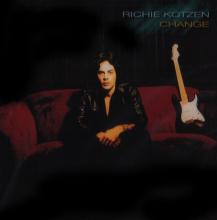 Richie Kotzen ( Poison, Mr. Big) came into the public eye in the early 90's with his eponomously titled solo release that established him as a guitar prodigy and helped land him the cover of Guitar World Magazine. Kotzen was then asked to join "Poison" and co-wrote most of the songs on the gold record "Native Tongue." Over the years Kotzen has developed as a singer songwriter and has stayed busy with an active solo career.