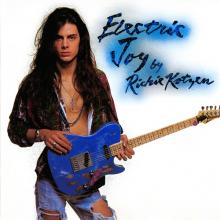 "Electric Joy" marks Kotzen’s(Poison, Mr. Big) third album for Shrapnel. Together again with Atma Anur, Richie delivers a collection of original instrumental compositions with tasteful melodies and contemporary guitar techniques that helped to cement his position in the music world as a guitarist's guitarist. Richie recorded this record shortly before signing to Interscope records. When offered the Poison gig, Interscope released him from his solo deal only for Kotzen to later sign a deal with Geffen.