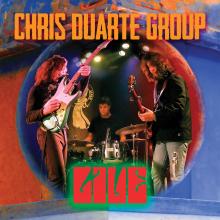 2013 two CD live release from the Blues rocker. After two decades of recording and touring with many live fan recorded bootlegs in circulation, Chris Duarte finally has an official live set that catches him tearing it up during his 2012 tour of Japan. A brilliant guitarist of the highest caliber, Duarte's riveting live show has been finally captured on disc and it's a fine thing to behold. Chris' recordings have always been rooted firmly in the Blues with a Rock 'n' Roll edge which further established Duarte as one of the rare musical talents of his generation. Chris Duarte Group Live continues in the tradition of smokin' Blues with doses of heavy Psychedelia throughout. With more than 10 records to his credit with no live CD in his discography, this set is the release for which Duarte fans have been waiting as it shows Duarte in his best light as one of the most impressive guitarists on the rockin' blues scene today.